How can a brief visit to Gettysburg capture the vast fields of death and desperate struggle that faced the men here? How can numbers like 75,000, 50,000, 23,000 be made understandable?
We chose to take a ride onto the battlefield by horseback. It's a wonderful experience especially for people who love to ride. We had a guide who spoke to us over a headset. That meant that we could listen as we moved, instead of struggling to hear if we were at the back of the pack.
It was a gorgeous day. In the 70's with a cool breeze. Not like the bone-melting 90's of 1863.
We passed Trossel farm made famous by Alexander Gardner's photos.  Understood how Pickett's men could move into position and never be seen. Marveled at the Roundtops and knew of the deadly Devil's Den at their feet.
It gave a pallet on which I could the pen a few more touching more personalized moments.
Joshua Chamberlain and the 20th Maine. The Bloody Wheatfield and the terrible slaughter there. The powerful North Carolina monument. The massive Pennslyvania monument holding thousands of names.
But then we took a moment and searched for him. Our family. The 13th New Jersey.
We found them. Their monument on Culp's Hill. Where they stood there few momunments rose--which immediately explained why they managed to only lose 1 man and a few wounded. They were far from the main action.
Considering that during our ride we heard artillery firing--one gun four times over a short period of time and we were told that in the battle the sound was five times louder for each gun (they used five times more powder), and knowing that on the third day 250 guns fired for more than two hours at each other,,,the sound was so loud, people 60 miles away heard it.
We were certain that Hank Van Orden and the NJ 13th must have been grateful that day to be out on the edge of the battle.
And on the distance...on the breeze, we heard a distant bugle playing taps. (A Civil War song)
Day is done
Gone the sun
From the lake
From the hills
From the sky
All is well
Safely rest
God is nigh.
Rest easy...we will remember. 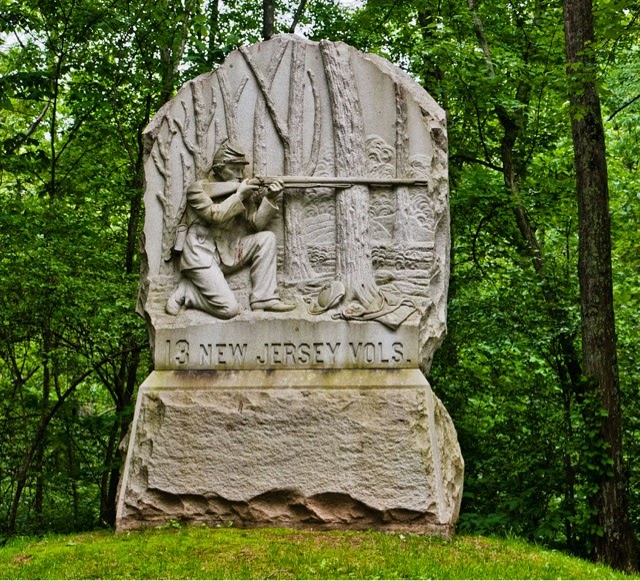 Posted by brookstne at 8:22 PM