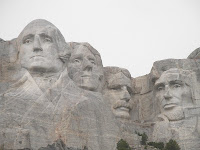 I was warned before going to Mt. Rushmore not to be disappointed.
They’re not all that big…I was told.

Who are they kidding?


Getting there was worth the trip. The crazy winding road was like riding on a roller coaster with its steep TIGHT turns. The highway would split through the trees, like an asphalt track. The single width car tunnels where you had to take turns with people coming the other direction where pulse jumping. And…besides, where else can you pull through a tunnel just to find four great men’s faces hanging on a mountain before you?
Yep. It was cool!
The mountain was bigger than I thought. Maybe because I’d been warned. Tall, majestic, impressive and still puzzling even after hearing the story.


I think Rushmore is more about a belief in the greatest of America than anything.
The reason I say that is because many people are offended by it. They superimpose photos of Native leaders…like Sitting Bull and Crazy Horse above or below the faces of Washington, Jefferson, Roosevelt and Lincoln. As if to say that those native men were greater than the “European-based” white leaders.


I won’t argue about the unkindness of the white development of this nation. I teach it every day—I know the details. But I believe that the leaders dreamed of a place where people could live in peace. Where families could grow and believe in whatever they wanted. Where prosperity could be had for those who would work hard. And that is what Mt. Rushmore symbolizes.
Our experience was amazing. A terrible storm came in while we were there. The weather service warned that softball size hail was imminent. So, the Rangers kept us indoors for quite a while. The hail did not come there but to a small town not far away.
Clouds came down over the faces and when they lifted—it looked as though Washington was crying.
So, for the future that Washington did not manage to find, for all the heartache that came…he knows the truth and there is the regret. Washington’s tears. 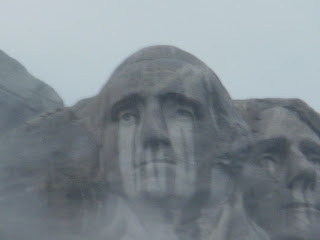 Posted by brookstne at 6:03 PM