The Tetons - Colter Bay - The Way to Stay

Let’s face it. A 10 night. 3100 mile road trip. The price of gas alone put these now weary travelers on a budget.


We looked for the cheapest way (other than tenting) to stay in the Tetons. We discovered something COOL!!!! 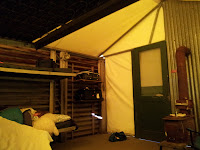 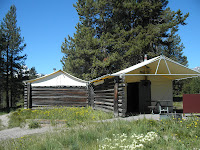 In Colter Bay Village (I’ll explain who he was in a minute) they have a thing call Tent-Cabins. And they’re fun! Two solid sides with canvas around and overhead. Four bunks, a wood-burning stove to stave off the chill, a picnic table, a fire ring and…wait for it…a bear box! Yep, we’re in bear country! 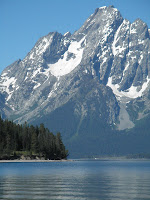 Colter Bay named after John Colter part of the…come on, join in…the Corps of Discovery or Lewis and Clark group if you’re more comfortable remembering that, is part of Jackson Lake.
History moment: John Colter was the fastest runner in the Corps of Discovery (they used to have footraces as entertainment—ooh! That sounds so entertaining! Personally, I love my computer and mini dvd player.) He went along as a hunter and on the return trip, when Lewis split his Corps into three groups, John Colter was captured by some Blackfeet Indians. They stripped him and for fun before killing him, said if he could outrun them, he could live. They were in a field of prickly pear cactuses (or is it cacti?). Barefoot and buck naked, he took off. Lucky he’d had plenty of practice racing. It took three days but he did it, he outran them. That bit of thrill became known as Colter’s Run.
Well, after the Corps made it near home, John Colter left the group to return to the West and the rest…is mostly forgotten history. But not by this historian! 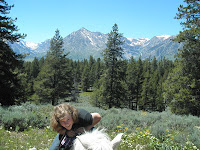 He became a well-known mountain man and trapper and having lived and “discovered” Jackson Lake area, Colter Bay is named for him.
Colter Bay has a boat dock, swimming, hiking, restaurants, clean flush restrooms, easy access to Yellowstone, a nice gift shop, cabins, tent cabins and horseback riding. It’s a wonderful “resort” in miniature with the rustic-ness of a wilderness National Park.
We loved it!

Posted by brookstne at 4:00 PM