National Parks & the Animals -- In the Tetons

You know traveling through and to these National Parks, there’s a piece of me that keeps making me think of Jurassic Park.  Everywhere there’s an anticipation and pressure to see “them”. The animals. 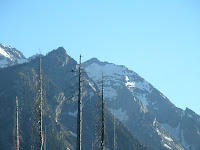 Everywhere we went people would compare “sightings”. A grizzly! Black Bear (not necessarily black btw). Bison. Moose. Elk. Deer. Marmot. A herd of (fill in the blank). We saw a mated pair of bald eagles (actually the second time in my life I’ve had the chance for that—the other? You guessed it—my Lewis and Clark experience canoeing on the Missouri—see why Driven2Teach is so life changing?) and their nest and something poking its head out. I’m going to guess it was an eaglet. J These guys were on the shores of Jackson Lake and only accessible by boat. 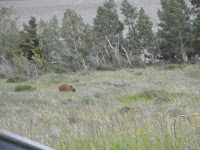 It was great. But let’s hope that these animals can continue to survive. We were told about the Elk Refuge outside of Jackson Hole. It was created because the elk were starving one winter. Within a nose’s sniff of hay and no one helped. “It was a national disgrace,” said our boat guide.
But now there is this National Elk Refuge which even has webcams and according to him, during the winter, now that the elk know of this place and gather there, it’s a sight to behold. And you don’t even have to leave your home to see them. Here’s the link: http://cams.alltrips.com/elkrefuge/elkrefuge.jpg
But take my advice. Go. Go, go, go! Go and visit our national treasures. 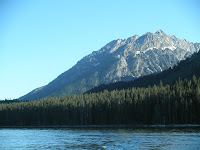