Turkey is a fascinating place. I expected more of an Arab feel. Wrong. Turkish...I don't think that's what it's called by its speakers, is a mishmash of languages. I recognized English type words. French, Arabic and even Slav or Russian.  Makes sense since it's the thoroughfare between East and West. But every language bits I know came to me, but none fit the bill.
We were fairly unprepared for our trip to Turkey, so I thought I would offer some observations for any interested parties.
What to Expect:
Very little English
We spent the first several days outside of Istanbul. We struggled to find people who really spoke English.
Use cash
Before I left, I checked with my credit card companies to let them know I was coming here. They said it was possible that charges could be denied because this is a high loss country. Several times we tried our Visas--3 different cards---and they were rejected. However ATMs are easily accessible. In 2015 10 TL (Turkish lira) are worth about $3.50 US
Crazy driving
Lanes and speed seem to be a bit of a suggestion.  Expect to be cut off. Honked at if you're not moving just as soon as the light is green. Road work that just suddenly starts and mountain one lane highways that have no barricade. It was very exciting at times! We were glad for the gps.
Otogaz....gas stations
Gas is full service. Just say full and you'll get what you need.
Breakfast
Plain yogurt. Cheeses. Breads. Eggs, mostly boiled. And salad. Olives, tomatoes, some fruit. I was used to this from my time spent in Israel. Jams and honey. Coffee, tea, juice and maybe some cereal.
Oddities...
People running across the highway--often I wondered where they had come from and why were they crossing at that point.
Lots of motorcycles with two people riding. Young, old didn't matter.
Many loose cats. Canakkale had tons of them! In the US we don't allow roaming animals like this.
BIG loose dogs. They all seem to be similarly genetic.  Sort of a German Shepard mix
Farm equipment on the highway. We were on the way to Troy and were nearly crushed by the biggest combine I've ever seen!
Many, many outdoor cafes. Don't look at the people inside or they'll try and pull you in. The pictures however will help you find what you're looking for.
Perhaps the strangest thing we noticed are the buildings. Soooo many old, abandoned buildings, but tons and tons of newly constructed ones. It was often hard to tell if they were still being worked on or had been given up on. The big cement frames were nearly always filled in by red brick, much of which didn't even seem to have mortar. Hard to see how that would offer much protection from heat and cold.
We picked up about fifty words in the three days we were there, but never could master "thank you" or "please". Dumb, eh.
Do have the lamb doner kebabs and the lamb shish. Yummy!!
And su is water.
Just so you know....c with a scidilla is pronounced Chu.  And s with a scidilla is pronounced sh.
Istanbul is a massive modern city, so don't plan to drive there.
Be sure to go out to the countryside. It's very rural and beautiful.
We LOVED taking the ferry back and forth. 30 TL round trip. The Dardanelles/Bosphorus straits are lovely. 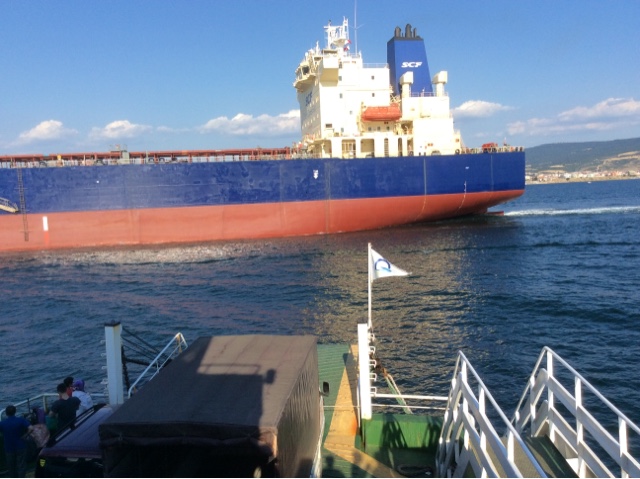 Posted by brookstne at 2:11 AM